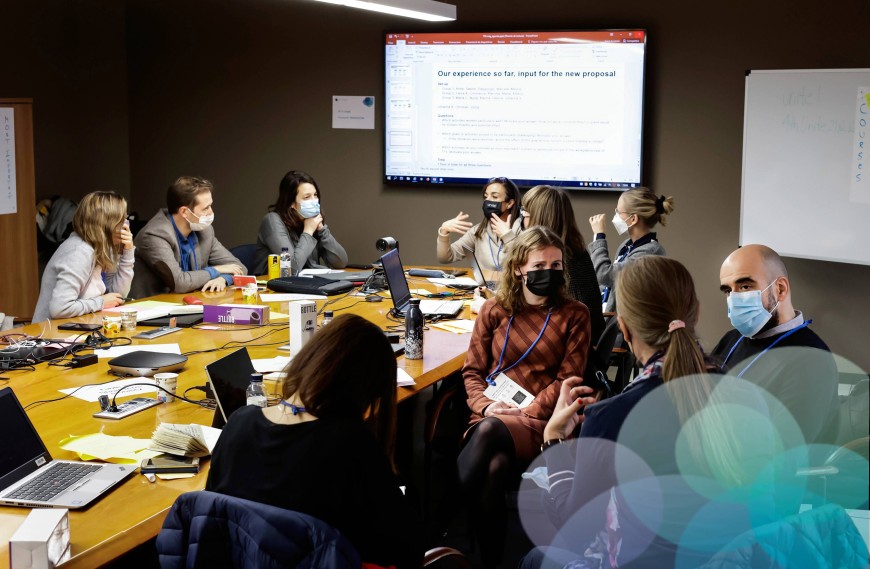 At the end of November, the European Commission launched the new Erasmus+ call in the context of the European Universities Initiative. The new call will allow Unite! to define an action plan for the coming years. The call will provide support to existing institutional transnational cooperation partnerships, such as Unite!. The aim is to build on the institutional cooperation achieved so far and to further deepen, intensify and broaden the effectiveness of this existing cooperation to advance the process of transformation of higher education towards fully-fledged “European universities”.

A successful proposal within this competitive call will enable Unite! to secure further funding for a period of 4 + 2 years. The deadline for the new proposal is 22 March 2022 and a decision is expected by end of July.

For Unite!’s president Tanja Brühl, "the new Erasmus+ call gives us the opportunity to define a new Unite! mission statement after two years of intense work of the different working groups of the alliance. Unite! now has sufficient background to define a long-term strategy that will allow it to advance its objectives towards the achievement of a new model of European university of innovation and technology".

A construction that Unite! will now tackle with the integration of two new members: Graz University of Technology (Austria) and Wroclaw University of Science and Technology (Poland). Both are technological universities that share the spirit and dynamic approach of Unite!. During 2022, the onboarding process will take place and will culminate at the end of the year with their full integration into the alliance.

representatives of the alliance participating in the virtual Forum of Universities for the Future of Europe on 25th and 26th of January, originally planned to take place in Paris. Set within the French Presidency of the Council of the European Union the Forum will be an opportunity to highlight the role of European universities for the Europeof the future and their contribution to its construction. Through dialogue between the different actors of the European Higher Education Area and political stakeholders, this event will be give Unite! an excellent opportunity to show its results and its active role in transforming the Higher Education area as one of the current 41 European University alliance

On the 3rd and 4th of March, nine students from Unite! universities will take part in the European Students' Assembly, which will bring together 200 designated student representatives from the 41 European University Alliances (EUA) at the European Parliament in Strasbourg. The conference is the first in a series of meetings that will give students a public voice in the European Union. The European Students' Assembly, one of the main activities of the European Universities Community, will be a unique opportunity for students from across Europe to address some of the complex challenges facing the EU today. They will do so through different panels and round tables: How can the EU bring its citizens together around its common values?; How can the European Union become more resilient to cyber-attacks?; After the pandemic, do we need a European Health Union?; Agriculture versus sustainability; what economic model can the EU adopt?; How should the European democracy of the future look like?; How should the EU position itself in a globalised world, vis-à-vis other actors such as the US, China or Russia, and with regard to conflicts in its neighbourhood?; How should the EU prepare itself to deal with the upcoming refugee crises?; and How to build future-oriented, digitized and yet inclusive higher education systems across the European Union?

Over the past year, the Unite! community has contributed substantially to the development and advancement of the alliance.

“The connectivity of our current seven partners has grown continuously. Due to the large number of experts contributing to so many activities across all partners, more and more students and staff benefit from our alliance-wide offers. This will now be further strengthened by a deeper institutional cooperation within the new Erasmus+ project and also by the expansion with two new partners. We are very pleased that Graz University of Technology and Wroclaw University of Science and Technology are on board and that we will pursue this path together with them.,” says Andreas Winkler, Unite! Secretary General.

4th Unite! Dialogue in Barcelona (November 2021) the Task Forces had the opportunity to share and discuss their present and future. The Governing Platform, the Academic Forum and the SURE! student forum, governing and representative bodies of the entire Unite! community, were able to meet in person in 2021 and take the first decisions to ensure the progress of the alliance in its objectives.

The seven partner universities aim to use the European University to create a trans-European campus for students and researchers with the involvement of regions and companies. The partners have a total of 167,000 students, already cooperate closely in more than 80 EU projects and have exchanged more than 2,000 students in the past five years. The alliance has set itself the goal of combining courses for the benefit of students, breaking down existing technical and administrative hurdles, and thus significantly increasing student mobility. Research will also benefit from the conditions created for larger and easier cooperation, which will strengthen the competitiveness of the European Higher Education Area overall.