The experiment has been carried out at the Radioactive Ion Beam Factory RIBF at RIKEN (Japan) by a large international research team. Significantly involved were besides TU Darmstadt, scientists from TU Munich, the RIKEN Nishina Center, and the GSI Helmholtz Center for Heavy-ion Research. The experiment yielded an unambiguous signal for the first observation of the Tetra Neutron. The result has been published in the current issue of “Nature”.

The building blocks of atomic nuclei are nucleons, which exist as two kinds, the neutral neutrons and the charged protons, representing the two isospin states of the nucleon. To our present knowledge, nuclei made of neutrons only are not existing as bound nuclei. The only bound systems known made of almost only neutrons are neutron stars, which are very compact high-density objects in the universe bound by the gravitational force with typical diameters of around 10 kilometers. Atomic nuclei are bound by the nuclear strong force with a preference to balance neutrons and protons, as known for the stable nuclei we find on earth.

“This experimental break-through provides a benchmark to test the nuclear force with a pure system made of neutrons only", says Dr. Meytal Duer from Institute for Nuclear Physics at the TU Darmstadt. “The nuclear interaction among more than two neutrons could not be tested so far, and theoretical predictions yield a wide scatter concerning the energy and width of a possible tetra neutron state. We are currently planning to a next-generation experiment at R3B at FAIR, which will detect directly the correlations among the four neutrons with the R3B NeuLAND detector, which will give deeper insight to the nature of this four-neutron system”. 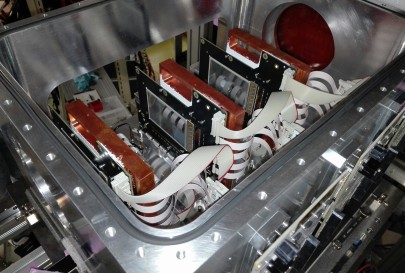 The experimental study of pure neutron systems is challenging because neutron targets do not exist. In order to create multi-neutron systems in a volume where the neutrons can interact via the short-range nuclear force (few femto-meter, 10-15 meter), nuclear reactions have to be used. Here, the interaction of the neutrons with other particles involved in the reaction process poses a major problem, which can mask the properties of the pure neutron interaction. The scientists have overcome this problem by shooting out the compact alpha core from 8He instantaneously induced by a proton of the liquid hydrogen target. The remaining four neutrons are suddenly free and left alone and can interact among each other.

“Key for the successful observation of the Tetra Neutron was the chosen reaction, which isolates the four neutrons in a fast (compared to the nuclear scale) process, and the chosen kinematics of large momentum-transfer, which separates the neutrons from the charged particles in momentum space”, says Professor Dr. Thomas Aumann from the Institute for Nuclear Physics at TU Darmstadt. “The extreme kinematics resulted in an almost background-free measurement. We now plan to employ the same reaction in an experiment at the RIBF to make a precision measurement of the low-energy neutron-neutron interaction. A dedicated neutron detector for this experiment is currently being built at our university”.