Alliance with the Nazi regime

2,822 students were enrolled at TH in the winter term 1930/31 when the National Socialist German Students’ League first gained 46 percent and emerged as the strongest force on the Student General Council.

As did other technical universities, TH Darmstadt attracted the interest of the Nazi regime which was striving to become an “autarkic military state” and thus investing heavily in armaments research, in particular aircraft and motor vehicle research.

An active National Socialist science policy privileging technical sciences and technical universities forged an alliance between science, industry and the military and this was the background to the investments in infrastructure and research that occurred at TH Darmstadt. The primary objectives were to optimise weapons systems, secure military food supplies and improve the country's resource base. By the time the Second World War had broken out, universities had become far more than partners or collaborators – they were an integral component of the despotic National Socialist machinery.

Under the “Law for the Restoration of the Professional Civil Service”, 13 Darmstadt professors were dismissed or forced into retirement – almost twenty percent of the 54 regular and associate professors, and one fifteenth of all assistant professors. Architecture, Chemistry and Physics were hardest hit. Students were a driving force behind the dismissal of politically unpopular teachers.

Karl Emil Lieser, lecturer in the Department of Architecture and newly enrolled NSDAP (Nazi party) member, filed a complaint with the university Rector about the “intellectual Judaisation” of the department.

When Lieser was dismissed following the incident, turmoil broke out amongst the National Socialist students. Lieser was reinstated by Reich Governor Jakob Sprenger.

The “Law to Prevent the Overcrowding of German Schools and Universities” reduced student numbers by introducing special quotas for “non-Aryans” and women. The university was remodelled according to National Socialist ideals and the Führerprinzip (leader principle).

In the course of National Socialist mobilisation, Professors Walter Brecht and Georg Jayme were appointed the heads of four-year-plan institutes specialising in paper production and textile chemistry. At least six other professors were assigned individual research projects in the context of the four-year-plan.

The Army Weapons Office united technical universities in the quest to develop the V2 rocket in a working group named “Vorhaben Peenemünde”. TH Darmstadt was the largest partner with 92 employees (mainly engine research, development of radio and control instruments, calculation of rocket trajectories). The Institute for Inorganic and Physical Chemistry (under Carl Wilhelm Wagner) as well as the Institute for Practical Mathematics (IPM, under Alwin Walther) were particularly high-profile, but professors from Mechanical Engineering, Technical Physics, High Voltage and Measurement Engineering as well as Electrical Engineering were also involved.

By the summer term, student numbers were down to 410.

A third four-year-plan institute for Technical Physics was founded under the leadership of Professor Richard Vieweg.

Heinrich Himmler ordered the “Research Community Ancestral Heritage” to institute research centres in concentration camps. In cooperation with the IPM under Alwin Walther, Jewish scientists were supposed to calculate mathematical formulas at the research centre M (Mathematics) in Sachsenhausen concentration camp. On the basis what we know today, it is impossible to determine whether the intended cooperation between Walther and the SS ever took place. It probably did not, because the IPM was destroyed before the project could get under way.

Three-quarters of TH Darmstadt were destroyed in air raids on the city. The winter term 1944/45 continued after some institutes had been relocated.

The Americans reached Darmstadt at the end of March. Part of the university was occupied; teaching was suspended. Ten professors who were involved in V2 research were arrested and interrogated in England and Augsburg.

American university officer Hartshorne did not pay much regard to TH Darmstadt and entrusted the fate of the university to the local military government based on a “working agreement”. This special status left TH Darmstadt with freedom to act on its own.

At the end of April, a board of trustees assumed leadership of the university. Under its direction the denazification of the teaching body began. Former Rector Lieser was removed from the university as an incriminated lecturer. In accordance with the university's 1926 by-laws, Professor Erich Reuleaux was elected new Rector. In the autumn, pre-courses were held for students in some disciplines.

On 17 January, TH Darmstadt reopened with 50 professors, 131 teaching staff and approximately 1,100 students. Denazification laws affected about 60 percent of the teaching body. Faced with numerous vacancies, the university leadership sought to abate the crisis by actively intervening in the denazification of its teaching staff in various ways, thus influencing the outcome of the proceedings. Approximately 15 professors were classified as “Mitläufer” (followers or fellow-traveller), most other proceedings resulted in the exoneration of the staff involved. Tension rose between TU and the Military Government when Rector Reuleaux refused to implement the regulations strictly, resulting in his resignation in July 1946. Professor Richard Vieweg succeeded him.

Quite a few members of Technische Hochschule staff who had worked in Peenemünde relocated to the US to work on the rocket development programme under Operation Paperclip. Darmstadt itself also saw involuntary as well as voluntary collaboration. Several Allied secret services paid visits to TH Darmstadt. The Allies’ interest left the professors with greater freedom of action.

The “International Conference on the Training of Engineers” was held from 31 July to 9 August, raising the issue of engineers’ political responsibility in front of an international audience. Despite solemn affirmations, professional egotisms thwarted the implementation of the abstract reform ideas that were expressed at the conference. The professors at Darmstadt took advantage of the opportunity to reconnect with the scientific community.

Monetary reform meant plans began to be made to rebuild facilities and institutes. The university had been lent resources for purposes of warfare and armaments research. Now it managed to secure these resources for the post-war period and integrate them into its own asset stock. Staff and material resources as well as structures that had been built specifically for the four-year-plan quietly passed into the hands of the university.

Article 131 of the Grundgesetz, the new German basic law, concluded the denazification of civil servants. With the exception of former Rector Lieser and Professor Friedrich List, the university reinstated or officially retired all teaching personnel affected by the law.

Amongst the university staff who had been displaced under National Socialism, only two associate professors returned to their former positions, Civil Engineer Adolf Kleinlogel and Music Theorist Friedrich Noack. The only professor whose re-appointment was supported by TH, associate professor Hans Baerwald, had passed away while in exile in the United Kingdom.

The last Rector from the National Socialist era, Kurt Klöppel, was re-elected, a choice that reflected TH’s self-image. The Americans had not accepted Klöppel as university rector in 1945.

The Presidium of TU Darmstadt decided to launch a research project investigating its own history between 1930 and 1960.

TU Darmstadt ceremonially embedded memorial cobblestones to commemorate six former scientists who were dismissed or ousted from TH, stripped of their rights and dignity by the university leadership, and forced into fleeing from Germany between 1933 and 1935: biologist Walter Schwarz (later known as Michael Evenarí) and physicists Hans Baerwald, Stephan Gradstein, Gerhard Herzberg, Luise Herzberg and Kurt Lion. The university is still considering an appropriate form of commemoration for all victims of the National Socialist regime.

The publication of two comprehensive dissertations and a conference completed a research project on the history of TH Darmstadt between 1930 and 1960, which had been commissioned by the Presidium. The university leadership formally and explicitly rehabilitated those who were wronged during the Nazi era, whose doctorate or honorary academic titles had been revoked or who had been disenrolled from the university register. 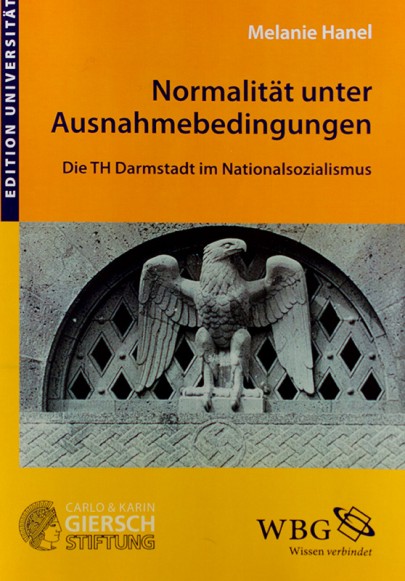